Run for Pompey set for October! 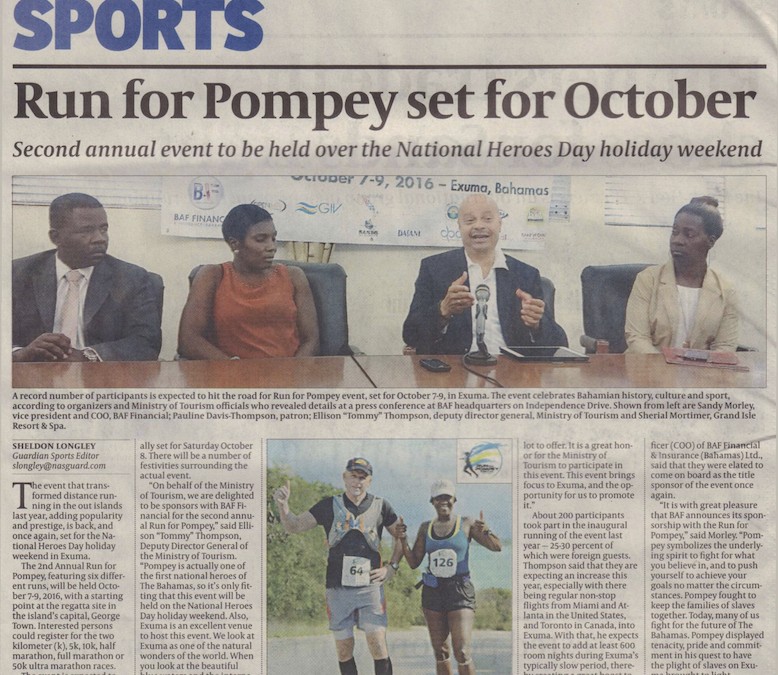 The event that transformed distance running in the out islands last year, adding popularity and prestige, is back, and once again, set for the National Heroes Day holiday weekend in Exuma, Bahamas.

The 2nd Annual Run for Pompey, featuring six differ-ent runs, will be held October 7-9,2016, with a starting point at the regatta site in the island’s capital, George Town. Interested persons could register for the two kilometer (k), 5k, lok, half marathon, full marathon or 50k ultra marathon races.

The event is expected to showcase Exuma and everything the island has to offer once again. Race day is actually set for Saturday October 8. There will be a number of festivities surrounding the actual event.

“On behalf of the Ministry of Tourism, we are delighted to be sponsors with BAF Financial for the second annual Run for Pompey,” said Ellison “Tommy” Thompson, Deputy Director General of the Ministry of Tourism. “Pompey is actually one of the first national heroes of The Bahamas, so it’s only fitting that this event will be held on the National Heroes Day holiday weekend. Also, Exuma is an excellent venue to host this event.

We look at Exuma as one of the natural wonders of the world. When you look at the beautiful blue waters and the international sensations such as the swimming pigs, you come to realize that the island has a lot to offer. It is a great honor for the Ministry of Tourism to participate in this event. This event brings focus to Exuma, and the opportunity for us to promote it.”

About 200 participants took part in the inaugural running of the event last year — 25-30 percent of which were foreign guests. Thompson said that they are expecting an increase this year, especially with there being regular non-stop flights from Miami and Atlanta in the United States, and Toronto in Canada, into Exuma. With that, he expects the event to add at least 600 room nights during Exuma’s typically slow period, thereby creating a great boost to the economy.

Sandy Morley, Vice President and Chief Operating Officer (COO) of BAF Financial & ‘Insurance (Bahamas) Ltd., said that they were elated to come on board as the title sponsor of the event once again.

“It is with great pleasure that BAF announces its sponsorship with the Run for Pompey,” said Morley. “Pompey symbolizes the underlying spirit to fight for what you believe in, and to push yourself to achieve your goals no matter the circumstances. Pompey fought to keep the families of slaves together. Today, many of us fight for the future of The Bahamas. Pompey displayed tenacity, pride and commitment in his quest to have the plight of slaves on Exuma brought to light.

“BAF was blown away with the popularity of last year’s event and couldn’t wait to get on board again. This event speaks to BAF pride and commitment to the history, culture and community of Exuma. The best part for us from a year ago, was that part proceeds from this event went toward a scholarship in helping to better the life of a resident from Exuma. We would like to express our true appreciation for being afforded the opportunity to partner with such a prestigious event. We are proud to be a part of it.”

Pompey himself was one of thousands of slaves in the islands during the early 1800s. He led a slave revolt and uprising that eventually led to British Governor of The Bahamas at that time ruling in their favor in allowing slaves to remain with their families on one island, Exuma.

Pompey was hailed as a hero, though later receiving 39 lashes as punishment. His actions is considered a key precursor to the emancipation in The Bahamas in August 1838. Run for Pompey represents a movement to further honor his memory, providing an annual schol- arship for students of E.xu- ma in need. Last year. Troyann Forbes, a student of L.N. Coakley Senior High School, was the recipient of the scholarship. She plans to attend Acadia University in the fall.

Once again, Olympic gold medalist Pauline Davis-Thompson is serving as the official patron of the event.

“It was truly a pleasure and delight to be the patron for the Run for Pompey last year, and to do it again,” said Davis-Thompson. “In the beginning. I did not know a lot about Mr. Pompey, but I now realize that persons like myself stand on his broad shoulders. This is the indomitable spirit where the Bahamian people came from and this is where one would have gotten that from.”

Davis-Thompson said that the island of Exuma holds a special place in her heart because it is the origin of her. grandfather, Thomas Davis.

“I’m proud as a Bahamian to be a part of this great oranization. I’m proud that BAF is sponsoring this event for a second time in a row.” she said. “For those of you who weren’t there last year, you must come this year. The atmosphere was just amaz- ing, and the island is just beautiful. You must come, you must bring your running shoes, and you must participate because Pompey got it all started for us.”

“Grand Isle is aboard because Pompey is such an important part of Exuma’s history.” said .Mortimer. “Exuma is a beautiful island, and bringing this event to the forefront, it was a no brainer for us to get on board as a primary sponsor again this year.”

The Run for Pompey event is being promoted as another huge extravaganza in sports tourism’s “Sports in Paradise” brand. At least five major international events are planned to be hosted in The Bahamas next year.

“Part of our strategy is to go after sports tourism and bring tourists to this destination,” said Deputy Director General Thompson. “This is actually bringing sports tourism to the Family Islands, so it’s great in terms of bringing awareness to the islands and bringing eco- nomic activity to the island. People will come to the islands and spend their money on the hotels, transportation and also restaurants
and the local businesses, so this particular event is really a shot in the arm for Exuma.”

The Run for Pompey also coincides with the ministry’s “Bahamas Love” calendar, a year of romance with a dif-ferent focus each month noted the Deputy Director General. 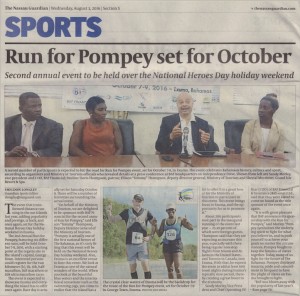