For the first time in its history, the Exuma Marathon was able to announce the two sweetest words for any event in The Bahamas: sold out.

Nearly 250 runners from as far away as Holland and Ireland packed the starting line last Saturday in Exuma, all united in a race that has become a highly anticipated staple in the Bahamian tourism calendar. 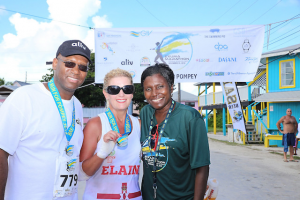 Not a single shirt or race number was left over, inspiring last-minute runners to simply jump into the crowd, just to participate.

Young and old, tourist and Bahamian, swift runners and  slow walkers all set off to pay homage to Pompey, the heroic slave who led a rebellion on the island almost 200 years ago.

“This is a special event,” said Doug Flannery, the Senior Director of Operations of the TCS New York City Marathon, who flew in with a group just to experience it.

“It has a distance for every level of fitness that will challenge even the most seasoned athletes.

The community involvement and Exuma hospitality makes this a must-do destination race. It’s a certainty that the event will again sell out in 2019. We are honored to participate alongside the Exuma Marathon team.”

The New York City Marathon typically attracts around 50,000 runners, making it the largest of its kind in the world.

But it is exactly the community integration, cultural relevance and authenticity of Exuma Marathon that makes this event special in the eyes of tourists.

Before the race on Nov 10th, tourists like Flannery took in all the attractions of Exuma, including the now world-famous swimming pigs. 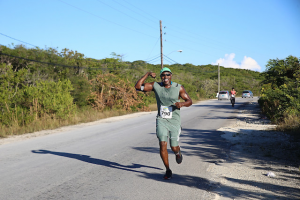 Once again, Pauline Davis-Thompson, the two-time Bahamian gold medalist, joined the race to drape a medal around each and every neck that crossed the finish line.

“This is the only event I’ve been involved with where you get to dance at the finish, receive your medal from an Olympic gold medalist and enjoy the warmth of the Bahamian spirit at every turn,” said Lacie Flannery, Event Director at the Advocate health Care International Chicago 5K Race. “Add that to the bluest shades of ocean you’ve ever seen as a backdrop and you have an event that is truly paradise.”

Exuma Marathon features races for all ages, with the most impressive being the Run for Pompey, a grueling 50K race.

This year, in striking solidarity, Michelle Gibson and Shavaughn Blades, from Nassau, crossed the finish line together with a time of 6:39:47. Elaine McAunulty, from Ireland, won the full marathon with a time of 5:55:14. 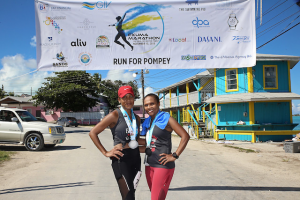 At its core, Exuma Marathon focuses on community engagement and offering an integral, cultural experience for all.

Last Saturday was the 4th installment.  Exuma Marathon is completely non-profit, with proceeds from the race going towards the annual Pompey Scholarship, awarded to a student in Exuma each year so he or she can attend college or university. Most recently, Deyonte Ferguson from L N Coakley took home the prize, and she is now attending Holland College in Prince Edward Island in the east coast of Canada.

“There is no doubt that this was our best year yet,” said Kevin Taylor, who founded the race with Jeff Todd, the Director of Communications for GIV Bahamas Inc.

“I think the sky is the limit for Exuma Marathon. It is a com 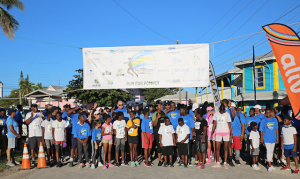 munity effort in every sense of the word, from our volunteers, to the nurses at the hospital, the police officers and countless others that help us put it together.”

The race is supported by its four-time title sponsor BAF Financial & Insurance.

Exuma Marathon also partnered with the Bahamas Half, presented by Bahamas Roadmasters, which kicks off from Arawak Cay in Nassau on November 18th at 6am.

The next Exuma Marathon is scheduled for November 9th, 2019.