RUN FOR POMPEY EVENT EXPECTED TO HAVE BIGGER TURNOUT 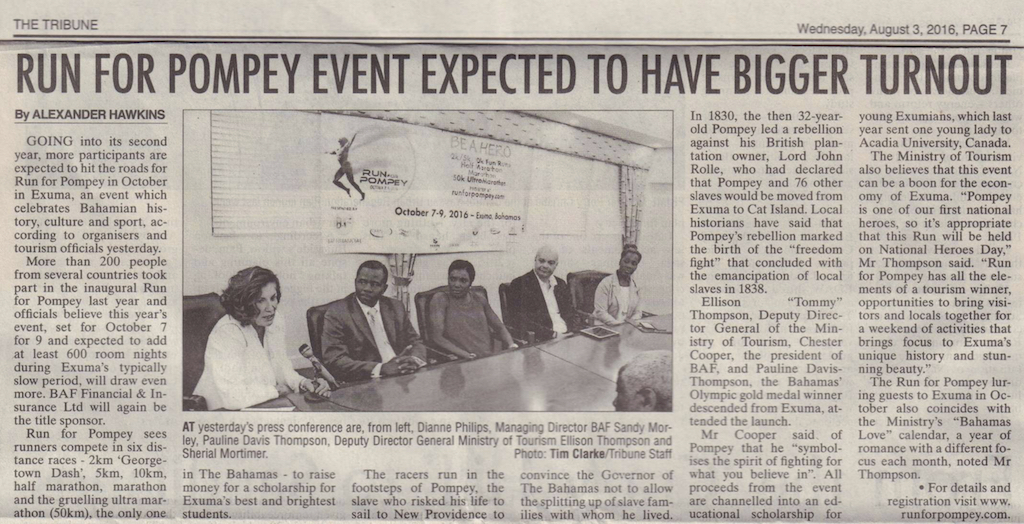 GOING into its second year, more participants a r e expected to hit the roads for Run for Pompey in October in Exuma, a n event which celebrates Bahamian his- tory,cultureandsport,ac- cording to organisers a n d tourism officials yesterday.

More than 2 0 0 people from several countries took part in the inaugural Run forPompeylastyearand officials believe this year’s event, set for October 7 for 9 and expected to add at least 6 0 0 room nights during Exuma’s typically slow period, will draw even more. BAF Financial & In- surance L t d will again b e the title sponsor.

Run for Pompey sees runners compete in six distance races – 2km ‘Georgetown Dash’, 5km, 10k half marathon, marathon and the gruelling ultra marathon (50km), the only one in The Bahamas –  to raise money for a scholarship for Exuma’s best and brightest students.

The racers run in the footsteps if Pompey, the slave who risked his life to sail to New Providence to convince the Governor of The Bahamas not to allow the splitting up of slave families with whom he lived with. In 1830, the then 32-year- old Pompey led a rebellion against h is British plantation owner. Lord John Rolle, who had declared that Pompey and 76 other slaves would be moved from Exuma to Cat Island. Local historians have said that Pompey’s rebellion marked the birth o f th e “freedom fight” that concluded with the emancipation o f local slaves in 1838.

Mr. Cooper said of Pompey that he “symbolises the spirit of fighting for what you believe in.” All proceeds from the event are channeled into an educational scholarship for your Exumians, which last year send one young lady to Acadia University in Canada.

The Ministry o f Tourism also believes that this event can be a boon for the economy o f Exuma. “Pompey is one of our first national heroes, so it’s appropriate that this Run will be held on National Heroes Day,” Mr Thompson said. “Run for Pompey has all the elements of a tourism winner, opportunities to bring visitors and locals together for a weekend of activities that brings focus to Exuma’s unique history and stunning beauty.”

The Run for Pompey luring guests to Exuma in October also coincides with the Ministry’s “Bahamas Love” calendar, a year of romance with a different focus each month, noted Mr Thompson.

• For details and registration visit www.runforpompey.com 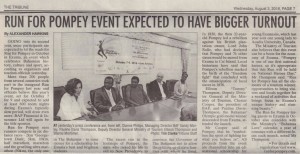